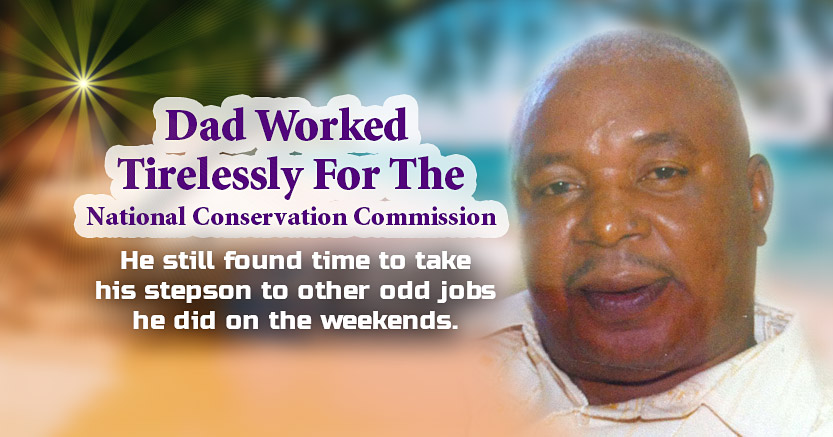 Ricardo Clyde Johnson was known simply as ‘Clyde’ to those around him. A man with a hearty laugh and generous spirit was the character that went along with that name. In 2016, those around him took a hard losing not only a father, a step- father, a husband but also a true friend.

Cylde Johnson was born on July 11th in the year 1959. Raised in a poor family he did not have the quintessential or easy upbringing. Those who surrounded him, and were loved by him could easily recite the many hardships he experienced in his upbringing. Despite the challenges of his early life however, Clyde turned things around for himself. He made it his life’s mission to always care for his family which comprised of his wife, his step- daughter, step- son and son.

His stepson, 27-year-old Cleo Omar Hurdley credits his late step- father for his hardworking spirit. Even though his step- dad worked tirelessly for the National Conservation Commission- a job he spent over ten years doing- he still found time to take his stepson to other odd jobs he did on the weekends. On Saturdays and sometimes Sundays, during the summer vacation, they would work together digging wells- a hard, enduring yet quality task. His then teenaged- step-son enjoyed those ventures because as it provided him with enough pocket money to buy anything he wanted- a treat to a young boy. Little did he know at the time, these trips instilled in him a strong sense of work ethic and responsibility.

Cleo, who now has two children of his own- 7-month-old twins- carries on the same attitude his step-dad taught him with his son and daughter.

The deterioration of his health was a hard blow to his family members, who each did their part to take care of him between their various work schedules. His step- son who worked as a driver at a company near his step- father’s Maynard’s St. Peter home, would visit as much as he could. On those days, he would come home to find the man sometimes watching television or at other times enjoying quiet time in bed. “There were times when he was lively and cheerful and he would watch the game on television with me.” Cleo recounts. He tells that at other times the ailments took an obvious toll on his body, and his mood would become somber.

It was in these latter days that Cleo began to feel as though he was grieving whilst his step-dad was still alive –  grieving for the illness and the pain that came along with it, heavy with the weight of the dawning possibility that he might lose the man who help raised him, and feeling helpless that that was nothing he could do.

What he did however was to share as much as his time with his stepfather as he could. He remembers the days of conversations where he would read from the Scriptures and encourage his step- father in the promises of God. He remembers the nights and the mornings of praying for him. It is these moments he cherishes and which always conjure when he thinks of his step- dad.

Ricardo Clyde Johnson died peacefully at the Queen Elizabeth Hospital due to kidney failure in after months of battling complications. Cleo recounts the surrealism of the whole experience. “I think we’re all still in a state of shock.” He tells. He explains that is it not the type of shock that comes from sudden death but where you feel as though something is dreadfully missing, as though something irreplaceable has been lost “…like losing piece of your heart.” He goes in further detail, stating that though they were no actual tears on his part, there was no shortage in the agony he felt. “You always wish you have more time, with someone you love. You always wish there was something more you would have said. All you have left are memories and there’s a pain knowing that you can create new ones”

His wife, Cleo’s mother, picked out the casket- a beautiful chestnut brown mahogany piece for her late husband, and the stylish black and purple ensemble which he was laid to rest in. At his service, Cleo comforts his mother and siblings, as many get up to eulogize his step- father as a man “with a kind heart and generous spirt.”  He continued his effort at the burial site at the Westbury Cemetery, where many gathered to pay their final respects. “It’s heart-wrenching watching them go… but you have to be strong. I had to be strong for my mother…my brother.”.

When ask of how he copes now with his late step- father’s death, he recounts an anecdote. He tells of his step- father’s culinary skills cooking what was famously known in their home as a “1,2,3’ “What it basically, was, was corn beef and macaroni” he laughs at the simplicity of the dish. “We knew when Clyde was cooking that that was what we were eating. It was probably the only thing he knew how to make.” Yet he recalls the dish as the most delicious thing he ever came across. “Everything about it was perfect!” Cleo tells.

Having tried to recreate the dish many times since his step- dad’s passing, he states that he has never came near to making it like he did.

“…But that’s how I like to remember him. He was just a good presence” he states, “and we miss him all the time.”