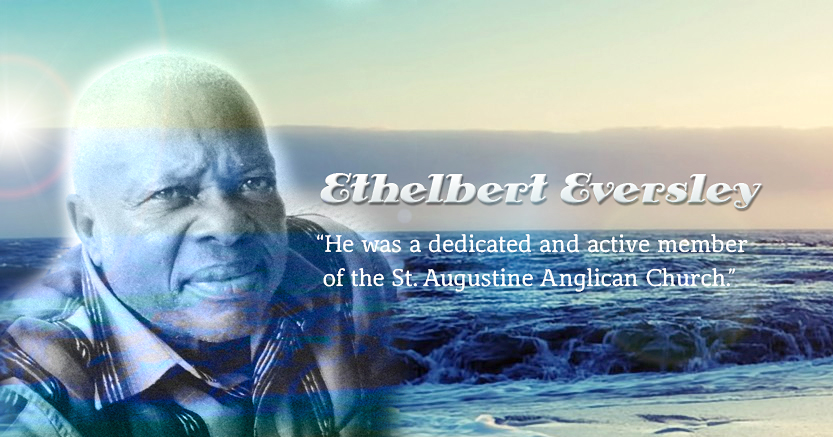 Ethelbert Whitfield Eversley was born on November 30, 1937 in Newbury St. George to the late Inez Reid . Dad later moved to Belair St. George in 1976 with his companion Marlene. They had been together for 45 years and were married on December 24, 1987. Dad was a ladies man and produced 11 beautiful children in which he had a special bond with. There were 4 boys…. the late St. Clair, Ricky (me), Patrick and Whitefield and 7 girls Isolene, Delcina, Marcia, Marguerita, Margo, Nicole and Ann-Marie. He was also an adoptive father to Simone Hall and stepfather to Henderson and Gordon. Dad had eight siblings Whitefield, Eustace, Elmina, Ruth, Maradelle, Ernestine, Vergene and Veda.

He worked at The Transport Board and later moved to the Ministry of Transport and Works in 1967, where he retired after 32 years of service. After retirement dad did not have a dull moment. He assisted Waithe’s Funeral Home as a driver, raised chicken, was a gardener and a driver to many who needed a ride to the supermarket, events and many more. He was also the great tour guide when the family came in for a visit. Dad was a hard worker and a good provider but also a cautious one as well. You could find him in a potato and yam ground getting a rod or two in which he supplied to many a friend or family.

I cannot recall dad being angry as
he was a quiet and very cool dude.

He was a dedicated and active member of the St. Augustine Anglican Church. He was a part of the Usher Guild and traveled with his girl Esther Nicholas to many of the events. Dad was always ready and willing to help. He assisted at many of the church events. From helping in the bar, to parking and where ever else he was needed. This even continued after dad became sick in late 2012. As long as dad was able, he assisted. He too loved an outing and you would find him at many picnics.

Dad was a good speaker, adviser and loved a joke. His wife used to always tell him “he did not like noise but could start a riot.” Dad loved to tease his wife and made her fret occasionally. He loved to eat his ground provision but was not a fussy man. Fancy food was never his style. I cannot recall dad being angry as he was a quiet and very cool dude.

He passed away on the March 12th 2014 and was buried on March 21st, 2014 at St. Augustine Anglican Church Cemetery, Market Hill St. George. Dad was a great husband, father, brother, uncle, cousin and friend. We certainly will miss you dad but we thank God for having you. You are no longer in pain and with the Father up above we shall see you in glory.