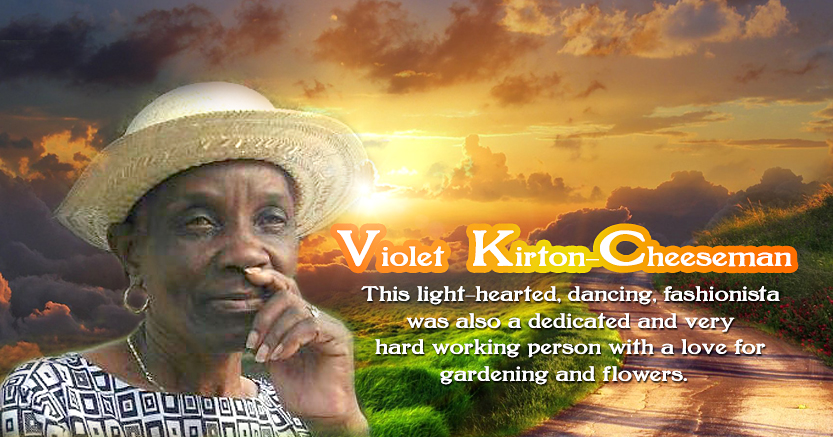 We celebrate the life of Violet Vastine Kirton – Cheeseman, who was known by her friends and neighbours as Velda; and more intimately by her family as Mom, Sister, Aunt and Gran.

Mum was light hearted and warm. She loved to laugh and play jokes on her friends. As a child into becoming an adult, she could be seen laughing and smiling which warmed the hearts of others. Her light heartedness was also seen in her love for dancing. She loved to dance, and more so often with her niece. Her favourite song was no match for her movements!

Mom was also a fashionista and trendsetter in her own right. She loved to shop for nice things and beautiful clothes; and people who knew her always complimented her on her style. My mom always talked about when she was a girl and a very particular dress from England. The dress only had one sleeve, but she wore it with pride, even though the children were laughing at her one sleeved dress.  “Later”, she often recounted proudly, “when they realized it was a style, they envied me.” Even with her style though, she didn’t think that the camera was good enough to capture her glamor, because she hated the camera. She would always hide her face when anyone tried to take pictures of her.

This light-hearted, dancing, fashionista was also a dedicated and very hard working person with a love for gardening and flowers.  She worked for Garvey for many years and later worked for hotels as a florist, where her beautiful floral arrangements were always complimented.  Her love for plants and flowers were also evident at both of her homes with her beautiful gardens and elegant landscaping.

My fondest memories of my mum were growing up under her love and generosity as a child. Mum was our rock, provider, chef, confidant and protector. To sum it up, she was AMAZING! Through hard work and self-sufficiency as a single mother she provided for her eight children and ensured that we were not displaced from our home. Or that time we saw her walking up the gap in the evening with a bundle of sugar cane on her head, just because she knew we loved it. Or how about that time, Isolene was coming home from school and this boy unaware of our great defender Velda, had the gall to interfere with her. Isolene, however, who trusted the strength of my mom as her protector, confided in her what happened that day. The next day, when school was over, mom hid among the sugar cane and waited on him, and when he passed, she jumped out, told him never to touch Isolene again, and warned him of the consequences if he did. Our defender, was triumphant, because the boy was so afraid that he ran home and never troubled her again. As I said, my mom was AMAZING.

But there were times, and oh were there times, when our loving mom was also our loving disciplinarian. I’m sure if our brother Nat, can still remember that flogging he received because he failed to lock the door of the chicken pen one night, and a thief came in and carried away the chickens. I can also recall the time, when I was at the tender age of 7 going to cook, resulting in me getting licks like peas for trying to burn down her house, when a neighbour told mom that I was going to buy oil to cook for my hungry sister Delcina. And, we can all remember the time, mom left breadfruit cou-cou in the larder and couldn’t find it when she returned. Our investigations into the case of the missing breadfruit cou-cou only revealed that no one had eaten it, with 7 suspects in the house (7 only because, she knew Nat didn’t eat breadfruit). So, all 7 suspects got lashes for the missing cou-cou. When the case of the missing cou-cou was later reopened, by the culprit as an adult, our loving disciplinarian discovered that she had wrongfully beaten the 7 suspects, when it was Nat (the only one spared) who had eaten the cou-cou. My mom, threatened to beat him then.

We immigrated to Canada in 1991 with mom, but she soon returned to Barbados to avoid the cold weather. But my mom still travelled numerous times to Canada to visit her children. In December 1991, she married her late husband Rufus Cheeseman at St. Jude’s Anglican Church; and was confirmed along with her husband at St. Jude’s.

She became ill a few months before retiring and was limited in her activities. Her time was spent mostly at home, and she was still able to go to church with her husband who took care of her.  After his death time was split, between Barbados and Canada we took care of our mother who had given her life to take care of us. Violet Vastine Kirton-Cheeseman passed away on January 21st 2017.  She is survived by daughters Isolene, Marcia, Delcina, Marguerita;  her sons Ricky (me), Whitefield, Victor; and her sisters Margaret, Phyllis, Enid and Gwendolyn, her 25 grands and 12 great grand children, all the Kirton, Moore families and friends.

My lasting memories of mom are of a light-hearted, hardworking and generous tower of strength, who never waned in her support or love for her family, and who braved even her illness with smiles and occasional outbursts of laughter. We will certainly miss you, but will continue to cherish the memories we have of you and will celebrate the legacy you have left.

We love you mom,