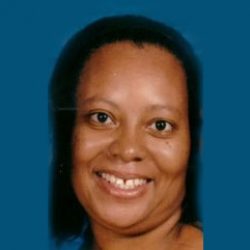 Light a Candle or Give a Gift
Obituary Viewed 4217 times

Daughter of Pauline Francis and the late Anderson Foster.

Grand-daughter of the late Felicia Trotman.

Grandmother of Derriko and Kiana Morris.

Relative of the Snaggs, Francis, Francois and Trotman families.

Special friend of Judith, Margaret, Joyce, The Hoyte family and many others.
The funeral of the late Cyrilene Patricia Weekes leaves Tudor’s Funeral Home, The Ivy, St. Michael on Wednesday, March 21st, 2018, at 2:15p.m. for St. Barnabas Anglican Church, Chapel Gap, St. Michael; where relatives and friends are asked to meet at 3:30p.m. for the Service and Interment. The organist and members of the choir are kindly asked to attend.

Flowers may be sent to Tudor’s Funeral Home, no later than 2:00p.m. on Wednesday. No mourning colours by special request. Family and friends are asked to wear blue. The body will repose for viewing in the Chapel of Tudor’s Funeral Home on Tuesday from 4:00p.m. until 6:00p.m.