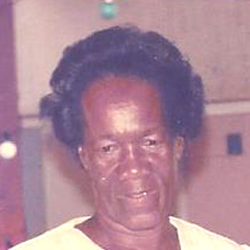 Aged 79, affectionately called “Erin”, late of Watts Village, St. George
and faithful Member of the Women’s Fellowship of Fulnec Moravian Church
entered into rest on 13th September, 2017 at the QEH.

Light a Candle or Give a Gift
Obituary Viewed 4431 times

Mother-in-law of Melvina Doughty. Cousin of Marvo Hope, Patrick, Wayne, Alfred, Thomas, Leslie and the late Robin Taylor and many others. Friend of Ernesta Bradshaw, Grace Millar, Lorina Alleyne and many others.

A Service of Thanksgiving celebrating the life of Eldene Elvina Doughty will take place at St. George Parish Church, The Glebe, St. George on Wednesday, 27th September, 2017 at 4:00 PM followed by the interment in the Churchyard.