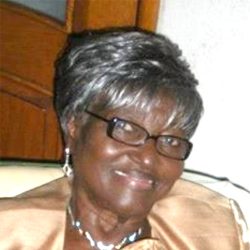 Aged 83, affectionately called “Jean Coward” of Kendal Hill, Christ Church, formerly of Grazettes, St. Michael and Gregg Farm, St. Andrew, devoted member of the Kingdom Hall of Jehovah Witnesses.  You took pride in serving your Jehovah and in caring for your family, even adopting others as your own.  We thank Jehovah for your life.

Light a Candle or Give a Gift
Obituary Viewed 4489 times

Adopted grandmother of Rosana and Rodcliff Massiah and Natasha Samuel;

Cousin of Owen Eversley, Marva Springer and Many others;

A Memorial Service celebrating the life of Esther Eugene Coward will take place on Saturday September 16, 2017
at the Kingdom Hall of Jehovah Witnesses, Sheraton, Christ Church where relatives and friends are asked to meet at 2.00 pm.