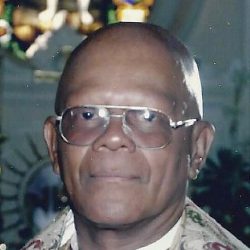 Frank Bert Hamilton Harcourt Marshall
Born 3rd November, 1945, the fourth of nine children,
and first son, of the late Stanley O’Neal Marshall and
Lois Marshall (née Foster). Both parents were teachers,
his mother resigning earlier to take care of the family and
his father having reached the position of senior teacher,
before his death at age 55 years.

Light a Candle or Give a Gift
Obituary Viewed 4325 times 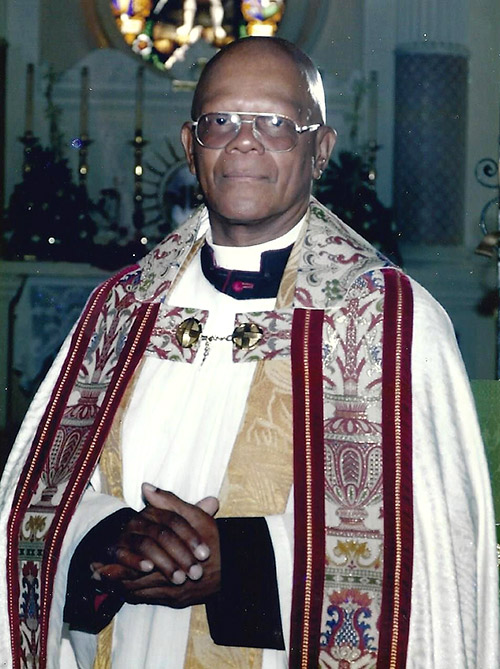 FRANK was educated at St. Bernard’s Primary School 1950-56; Combermere School 1956-58 and Harrison College 1958-63. He worked for two years in the Civil Service before resigning to enter Codrington College in November 1965 until 1969 to prepare for the Ordained Ministry. He pursued further studies at the University of the West Indies. He holds the Licentiate in Theology, the Bachelor of Arts, and the Master of Arts (History), and the Executive Diploma in (Human Resource) Management, through the Centre for Management Development and accredited by the University of the West Indies. Other courses undertaken have been a 2-week workshop in August 1990 at General Theological Seminary, New York, and sponsored by the Parish Development Institute, and a course in HIV-AIDS education and Counselling in 2003. He undertook the Doctor of Ministry Program (D. Min.) in Congregational Development with the Seabury Institute at the Seabury-Western Seminary in Evanston, Illinois, and graduated in 2007.

FRANK served also as Editor of the Barbados Churchman 1973 to 1974. He was Chaplain to the Bishop of Barbados, the Rt. Rev. Drexel Gomez, September 1990 to December 1992, during which period he was also an Honorary Canon until he acceded to the Stall of St. Aidan on the Cathedral Chapter and to the position of Rural Dean of the St. Michael’s Rural Deanery from October 1993, which positions were held concurrently until 31st December 2004, following which he was promoted to the Deanship. He performed the role of Vicar General of the Diocese (during absences of the Bishop from the diocese) from the enthronement of the current bishop in 2000 until 2012.

Ministry as Layman and Beyond

FRANK has been an Anglican consistently, throughout his life. Baptised at St. Joseph’s Parish Church, he attended Church and Sunday School as a member of the Parish of St. Anne-St. Bernard.

He was confirmed in December 1958, became a Sunday School teacher in February 1959, and participated also as an Altar Server.

In the Parish of St. Anne and St. Bernard, as a teen-ager, FRANK was afforded the opportunity by Canon Lloyd Clarke, the rector, to officiate in the conduct of Evensong and addresses to the congregation before entering Codrington College, and also served as a member of the Parochial Church Council 1964-65. He played a leading role in the 1964 Diocesan Stewardship Campaign as an area leader, coordinating aspects of that programme across a number of districts, and was thrilled to contribute his energies to the 2-week long preparation of the seating and altars for the historic Great Service which was held on September 6, 1964 in the open at the Garrison Savannah for 25,000 congregants.

He was a member of the St. Anne’s Church Lads’ Brigade, and was in fact responsible for the revival of that company in 1962 which he served as Sargeant and later as Sargeant Major. He became the Battalion Sargeant Major for the 2nd Battalion within the St. John Deanery. As a priest he continued to build and serve the Brigade, establishing companies at the Churches of St. Christopher (1972) and St. Matthew and the Resurrection (1974). He was elevated to the principal command – Regimental Colonel of the Church Lads’ Brigade island-wide 1975-83, and later filled the role of Regimental Chaplain from 1983-1997. 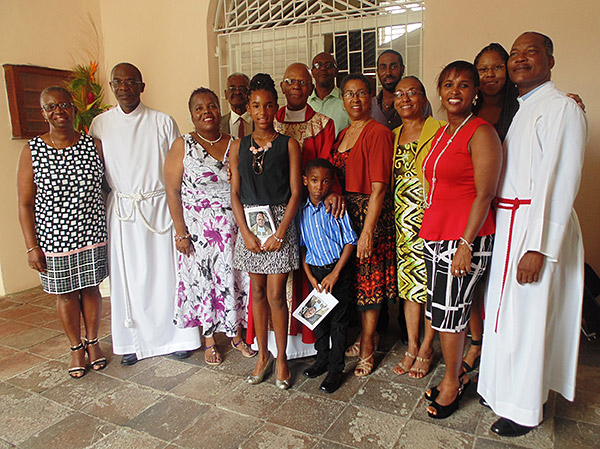 FRANK has always demonstrated a keen interest in the affairs of the Church, a strong sense of loyalty and a commitment to resolve issues and promote the good of the Church. It was he who took the initiative in 1978, nine years in the ministry, to call Clergy together to discuss concerns which were a source of burden following the resignation of two officers of the Synod in protest of the method of establishment of and appointment to the post of Canon Residentiary.

His objective was to have concerns carefully identified and brought to the Bishop in the effort to effect some better understanding and harmonisation of relationships in the ranks of the clergy. Similarly in 1982 he took the initiative to call and host a meeting of Clergy in the wake of the Dean/Archdeacon (Crichlow/Cayless) conflict; again in the hope of having problems examined and resolution reached.

Again his interest in fostering better relations among Clergy was demonstrated in 1988/89 when he initiated the Clergy Fellowship day, speaking to every clergyman personally, about the concept, and having the faithful of St. Stephen’s Church participate in hosting the first two annual Clergy Fellowship Days and encouraging others in building camaraderie. His interest in diocesan life was further manifested in his initiating of the first diocesan fund raising effort, the Diocesan Bazaar and Tea Garden at Bishop’s Court in 1990.

Generally, FRANK has had a strong sense of community, and has supported various institutions in society.

In the context of schools he has always maintained a strong link with principals and the progress of these schools and has been keen to hold School Services with instruction for the young ones.

He has been an unofficial Chaplain of Combermere School through many years and has functioned as Supervisor of External Examinations there between 1972 and 2001.

FRANK has interested himself in the social problems faced by the schools and has participated in and initiated efforts to assist students in crisis as well as counselled teachers.

He has been sensitive about the situations which could lead to social disequilibrium. Particularly would we note his initiative taken in the face of the nation’s economic crisis of 1991. He felt that the Church had a role to play in assisting the nation through the trauma threatened by the structural adjustments and economic strictures of 1991, with the prospect of devaluation of the dollar. Acting in the name of the Church, FRANK succeeded in calling on board four other senior priests, who with himself made an approach to the Prime Minister and Minister of Finance to offer the Church’s support and concern in facing this difficulty.

That intervention saw the group interacting with both the Prime Minister and the Coalition of Trade Unions, and it led to an eventual settlement which staved off the extended demonstrations and strikes that were threatened, and no doubt saved the day for the country. In the words of Leroy Trotman of BWU the (Barbados Workers’ Union) & CTUSAB (Congress of Trade Unions and Staff Associations of Barbados), FRANK was a “principal architect in the settlement of 1991″. All this took place without fanfare, and FRANK has permitted reference to be made to it without shouting aloud or touting the extent of his initiative in it. But it all arose from the concern with which he burnt for the national welfare. In addition to this he has been serving the Hotel Workers’ Division of the Barbados Workers’ Union as its Chaplain as well as Chaplain to the Congress of Trade Unions and Staff Associations of Barbados (CTUSAB).

His commitment to service saw him assume the role of Chaplain to the Psychiatric Hospital in October 1977 which he exercised until 2011.

FRANK has the capacity to relate to persons at all levels and in all walks of life, and to maintain a measure of dignity and appropriate decorum.

Worship and its environment have always received the most careful attention from him, as he maintains a high regard for things liturgical and sacramental, the solemnity and dignity which he deems important if persons are to be lifted to a sense of God’s divine loveliness and truth. But it is the desire for Christian Social Outreach that consumes the zeal of Frank, who has always felt in the words of Jesus in St. John’s Gospel Ch. 10, the urgency of Christian Mission: “And other sheep I have which are not of this fold; them also I must bring. …” Thus, he undertook the refurbishment of the St. Mary’s Home and its transformation as an Outreach Centre of the church to the Emmerton-Chapman’s and New Orlean’s community. The Barbados Diocesan Mothers’ Union also conducts a Breakfast Project there for School children within the surrounding community.

Codrington (Theological) College, 1965 until 1969 (in preparation for Ordination);

University of the West Indies, in graduate and post-graduate;

the Licentiate in Theology, 1969

Completed a course in HIV/Aids Education and Counselling, 2003.

Graduated with the Doctor of Ministry (Congregational Development), from Seabury-Western Theological College, 2007.

Completed a course in Chaplaincy with the International Fellowship of Chaplains, 2008.

Completed a unit in Clinical Pastoral Education with the College of

~ Two years in the Barbados Public Service, September 1963 – October 1965, at the Registration Department and Waterworks Department), obtaining an appointment to the Service in April 1965, before resigning to train for the Ordained Ministry. He also had Vacation Assignments at the Ministry of Finance and in the Court system (1967 and 1968).

~ appointed Rector of the Church of St. Matthew and the Resurrection, October 1972- October 1974;

~ Candidate in 2000 Election for Office of Bishop

~ Chaplain to former Bishop of Barbados, the Rt. Rev. Drexel Gomez, September 1990 to December 1992, the latter now being the Retired Archbishop of the Church in the Province of the West Indies.

~ Vicar General (i.e. administrator of the diocese), acting during absences of the Bishop from the diocese, September 2000 to 2012;

~ Ex-Officio on several Standing Committees of the Diocese of Barbados:

~ Dean Emeritus, December 1, 2015 – retired with General Licence as Priest of the Diocese of Barbados

~ Chaplain of the Barbados Workers’ Union;

~ Chaplain of the Hotel Workers’ Division of the Barbados Workers’ Union;

~ Chaplain to the Congress of Trade Unions and Staff Associations of Barbados (CTUSAB).

~ held the principal command as Colonel of the Regiment of the Church Lads’ Brigade island-wide 1975-83, and

~ Mediator in 1991 between The Coalition of Trade Unions and Prime Minister in the Structural Adjustment issue of 1991.

~ Children: one boy one girl; 2 grandchildren, girl and boy.

~ Commander of the Most Excellent Order of the British Empire (CBE)