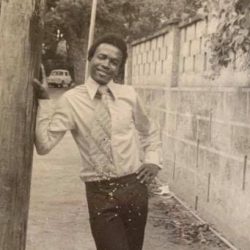 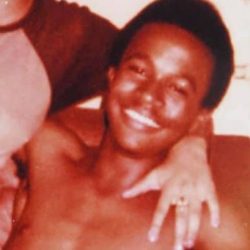 A Tribute to Dad

I have guarded and protected my emotions for many years surrounding the person in these photos. When I was very young around 4 or 5, my little heart would race with excitement when he came to visit us. I would giggle and stare at him and answer whatever questions he asked me, I felt so important…. Continue reading below.

Light a Candle or Give a Gift
Obituary Viewed 16376 times

They were mostly about what I liked to do. He would giggle while he ran his hand through my hair; commenting on the length and the amount I had.

The visits were brief, mini encounters with this man they said “is my father” so for every visit though far between, I held on to the last images trying not to forget our little meetings. A long time would go by before I heard /saw him again, However I would always hear through eavesdropping what was happening during those breaks.

My emotions turned a bit more to confusion

As I got older, ( around 7 or I began to ask more direct questions AND my emotions turned a bit more to confusion.

I did not understand what was dope (as they called it); all I understood was it was what was keeping him away from us, his children. I just wanted to get rid of this “dope.” Time again, would pass and out of no where there’s a call, I would answer and the voice, his voice would leave me frozen in my tracks.

This time it was more about my favorite subjects and school. (Primary School) I didn’t want to hang that phone up during those calls, trying to remember the tone of his voice and lock it in the special place I kept him.

From St Joseph to Bridgetown to find him

Time again would pass and his grand mother Eugene White, the person who would kill for him, would go every week, over an hour ride from St Joseph to Bridgetown to find him.

ALWAYS providing money, a home cooked meal and at least an hour just watching and talking to him.

Those talks included pleads to go with her to get help for his addiction.

Sometimes he would go but always return to his habits. On one occasion which was the only occasion, he gave her something to give us. It was a pack of roasted nuts each. There were moments he tried to help himself, by selling nuts in the town. In my mind I had received something as precious as gold.

I held on to those nuts and smelled the bag over and over again. It was a very long time before I dared to eat them, I was afraid if I ate them I would lose our connection.

I wouldn’t have anything from my father

When I finally grew the courage to eat them, they weren’t crunchy anymore and pretty terrible, I held on to them so long they grew stale but now it became another form of emotion, “determination.” I meant those bad boys were getting eaten.

I am older now, I’ve started secondary school and life is moving on for my brother and I.

We were eleven months apart so we entered Secondary School together, the same school. (Trents for Life!) I am a teenager at this point, and you know how teenagers are, everything is annoying, boring and embarrassing, trying to “fit in” whatever that means but basically figuring out who you are.

I was asked by one of my teachers about the careers of my parents, my emotions turned to “panic.” I rattled off my mother’s and father’s occupation and continued with the class assignment.

My secret, my story

In my fourth year, another student who knew of my family’s history told my friends about my father, my secret, my story. He said, “she fadda mad, he pon de street, he was in Glendary” (the prison) I was so very scared, and angry.

I had told my class during that assignment that my father was a Policeman.

I loved my father

It was easier to not have to explain what I couldn’t even explain to myself. I loved my father, yes the person in the photo is my Dad, but would anyone else understand what I didn’t fully understand.

It was nobody’s business, I left school early that day because I just couldn’t function anymore. The reaction was exactly what I was protecting myself from. I was teased about it but in some crazy way it brought relief it was done, it was in the open, everyone knows now. My emotion was “relief”.

Again, time is passing and I’m having conversations with my mother about seeing him.

She was always there and ready to take that step with me, in my time. I needed time, but would search every person’s face absentmindedly when ever I was in places I was told he would be.

I wanted to see him

Just before I left Barbados to go New York for school, I asked my beloved cousin Alan, to tell him I wanted to see him.

Alan worked in town at the time and saw my father often. He arrange to have him come by the store (Solid Gold) at 1pm.

I was there at 12pm. The time came and went and I became disappointed, as I was about to leave, I saw his eyes peering through the display window at the jewelry. I froze, my cousin called him and he came to the door. He wasn’t allowed in, I couldn’t walk.

I remember my cousin saying to him “look Renae, dey.”(in our Bajan accent) He panned the entire store searching faces like I did on many occasions looking for his.

Then our eyes met, I still couldn’t walk, my cousin laughed and told me “go long”. (Lol) I walked to him and he stared at me with those beautiful hazel eyes. They seemed to peer into my soul in search for all the time that had passed.

His voice was different from what I remembered

He held me, kissed my hand like I was the queen, smelled me, giggled and said, “Renae I love you.” I took his face and held it, the similarities were there but his voice was different from what I remembered.

We spoke, he questioned me again, asked about his son, my brother and advised me about boys, this made me laugh. I also found out that day what a funny man he was.
I left Barbados to the States, eventually making it my home.

Every time I returned I would go looking for my father. I would take clothes and shoes for him. Get him a bath and bring my brother’s kids to see him, to know him.

I eventually had my own son and at 2 months I took him to meet and know my father, his grandfather. My father had a tear in his eyes, he kissed the back of his grandsons head. He said, “he look like me” they do look alike, same big head and all lol.

I was not going to miss another minute of time. So I was bent on creating memories for his lineage.

I did this to the end, we have photos and videos with him spending time with his grand kids. I learned to love my father within the capacity he could give.

He loved me so much

He loved me so much and protected me in his own way and I loved him for it.

I would often buy food sit on the streets in town and eat with him to some disapproving eyes wondering what is she doing.

I was always happy to spend time with my dad, he was smart, whitty and funny as hell. A real trickster when he ready but it always made me laugh.

Whenever I left, he would say, “wen yah coming back?” I would always reply soon, very soon.

This time I will be making my last trip to see him in the flesh, and hold him and kiss him but he wouldn’t be able to return the gestures. DAD, I’M HERE TO SEE YOU ONE FINAL TIME, I’M HOME!