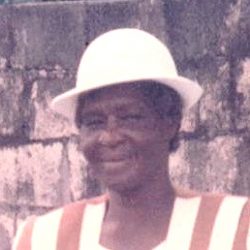 Light a Candle or Give a Gift
Obituary Viewed 3775 times

Daughter of the late Charles Morris.

Mother of 6 and the late Anthony “Tiny” Jordan.

Great aunt of Keisha Forde, Jillene Henry, Antonio Edwards and many others.

Relative of The Morris, Weekes and Alleyne Families. Friend of Leotta Harewood, Shirley Smith, Esther Nurse, Eleanor Mayers, Eucene Barrow, Harriette Yearwood, The Napeleon family and many others too numerous to mention.


The funeral of the late Ivy Jordan leaves Tudor’s Funeral Home, The Ivy, St. Michael on Friday 15th September 2017 at 9:30am for the Government Hill Seventh Day Adventist Church; Government Hill, St. Michael where relatives and friends are asked to meet at 10:00am for the Service. The cortege will then proceed to the Westbury Cemetery for the Interment. The organist is asked to attend. Flowers may be sent to Tudor’s Funeral Home, no later than 9:15am on Friday. No viewing by special request.