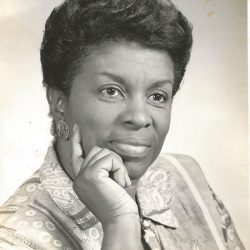 in the 60s when she left Barbados for England, ostensibly

to study music – an interest cultivated from the age of six,

but then switched gears and took up Communications doing

from the London School of Journalism.

Light a Candle or Give a Gift
Obituary Viewed 3836 times

Celebrated newspaper columnist, broadcaster, PR specialist, TV presenter and playwright, Jeannette Layne-Clark, added the title “novelist” to her numerous list of accomplishments before her passing in 2009.

The acclaimed Barbadian media practitioner, who had ostensibly become a household word in Barbados, launched her sole novelistic work, “A Villa in Paradise” at the Island Inn Hotel in 2005 before an appreciative gathering of family, friends and literary aficionados.

Marking a turning point in an expansive media career, it was lauded by her former school mistress, the late Dame Patricia Symmonds as “an intelligent, evocative, well-crafted novel” and by author Nailah Folami Imoja as “fascinating and fast-paced” with “lovely imagery and superb attention to detail.”

But how did the author view her latest literary offering and how did it come into being? “I have always wanted to do a novel and in fact I made several attempts to start.” Jeannette said.“ I almost finished one years ago … when I lived in Paris, and then two years later when I looked back at it, I thought it was such a load of rubbish that I just dumped it,” she recalled.

“From time to time, I’ve been meaning to do one. I’ve always had plots (of) stories in my head, but… (have been) distracted.” With more time on her hands, Jeannette decided it was “now or never.”