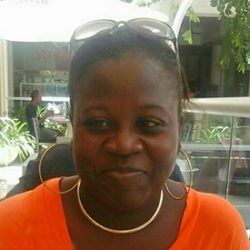 Light a Candle or Give a Gift
Obituary Viewed 4233 times

Daughter of Randolph and Yvonne Seales;

Daughter in law of Janet and Aubrey Blackett;

Sister in law of Jason and Mario Blackett, Cederick Hinds and Roderick Holder;

Niece in law of Bridget, Lucia and Monica Jones, Margaret, Roslyn and others;

Relative of the Jones and Seales families.

The funeral of the late SHYON NATASHA PACKER neeSEALES  takes place on Monday 11th September, 2017 at  Black Rock Seventh Day Adventist Church, Ellersie Gap, Black Rock, St Michael where relatives and friends are asked to meet at 2.00 pm for the service of Thanksgiving. The cortege will then proceed to St James Cemetery for the burial. Viewing of the body takes place at the church from 12.30pm until start of the service. Tributes commence at 1.15pm. Flowers may be delivered to Two Sons Funeral Home not later than 11.45 am on Monday.

Condolences may be sent to kmjtransportfuneralservices@hotmail.com or posted at KMJ Transport & Funeral Services on Facebook