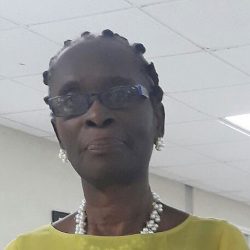 Wilma Anita Sutherland
Affectionately called “Nurse Sutherland’’ late of Wakefield Land, St John, formerly of Venture, St. John. Retired Sister of the Psychiatric Hospital. Devoted Member of the Hall’s Road Nazarene Church Senior Citizens Group; Secretary of The Organization for Parents of the Disabled and The Missionary Department of the Mount Tabor United Holy Church of America entered peacefully into rest at the QEH on December 21, 2017.

Light a Candle or Give a Gift
Obituary Viewed 3062 times

Daughter of the late Helena King and Clarence Aimes;

Wife of the late John Sutherland;

Grandmother of Riquelle and Kyle Sutherland;

A Service of Thanksgiving celebrating the life of Wilma Anita Sutherland will take place at St. John Parish Church on Friday January 5, 2018 at 3:30 pm followed by the interment in the St. John Cemetery. Visitation takes place at Mount Tabor United Holy Church of America Mount Tabor, St. John, on Thursday January 4, 2018 from 3:30 to 5:30 p.m. Flowers may be delivered to St. George’s Home for Funerals no later than 12 Noon on the day of the funeral.